On the first full moon of August my Daughter, Erin, and I made a pilgrimage to Goshen, Connecticut. We were drawn to the Mohawk Bison Farm where a white buffalo calf had been born in June. To Native Americans the birth of a white buffalo calf is the most prophetic of signs. The coming of the white buffalo brings purity of mind, body and spirit and foretells of the unification of all nations – yellow, red, black and white. The birth of the sacred white buffalo is a message of hope and a promise of harmony. 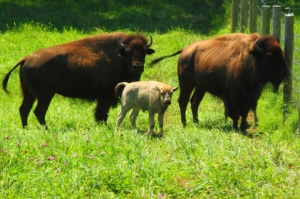 Although most tribes have their own version of the legend, the oldest and most well-known is the Lakota story of White Buffalo Calf Woman:

“One summer a long time ago, the seven sacred council fires of the Lakota came together and camped. The sun was strong and the People were starving for there was no game. Two young men went out to hunt. Along the way, the two men met a beautiful young woman dressed in white who floated as she walked. One man had impure desires for the woman. “She is beautiful” he said to his friend. “I will make her my woman.” When he tried to touch her he was consumed by a cloud and turned into a pile of bones. The woman then spoke to the second young man and said, “Return to your People and tell them I am coming and I bring them a gift.” This holy woman brought a wrapped bundle to the people. She unwrapped the bundle giving to the People a sacred pipe and teaching them how to use it to pray. “With this holy pipe, you will walk like a living prayer,” she said. The holy woman told the Sioux about the value of the buffalo, the women and the children. “You are from Mother Earth,” she told the women, “What you are doing is as great as what the warriors do.” Before she left, she told the People she would return. As she walked away, she rolled over four times on Mother Earth, turning into a white buffalo calf before she disappeared. It is said that after that day the Lakota honored their pipe. They walked a path of honor and respect, and buffalo were plentiful.” (from John Lame Deer’s telling) 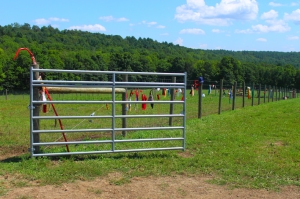 We were met by Peter Fay, the calf’s caretaker, who was a most gracious host. He escorted us past a fence line adorned with many offerings from other pilgrims. Erin left the traditional 28 prayer ties she had assembled during our drive, and I offered a medicine bundle that I had prepared before setting out on our journey. After going through a number of gates we arrived in a lush meadow of green grass and wildflowers that stretched out beneath Mohawk Mountain. We crested a small rise and there he was standing with his mother and another cow and her brown calf. Our host cautioned us to move slowly as these were wild animals and might spook easily. We approached to within about a hundred yards. They seemed to sense the respect with which we came and calmly looked at us as we stopped and offered our prayers. We left, our Spirits infused with peace and gratitude for this message of hope for the future.